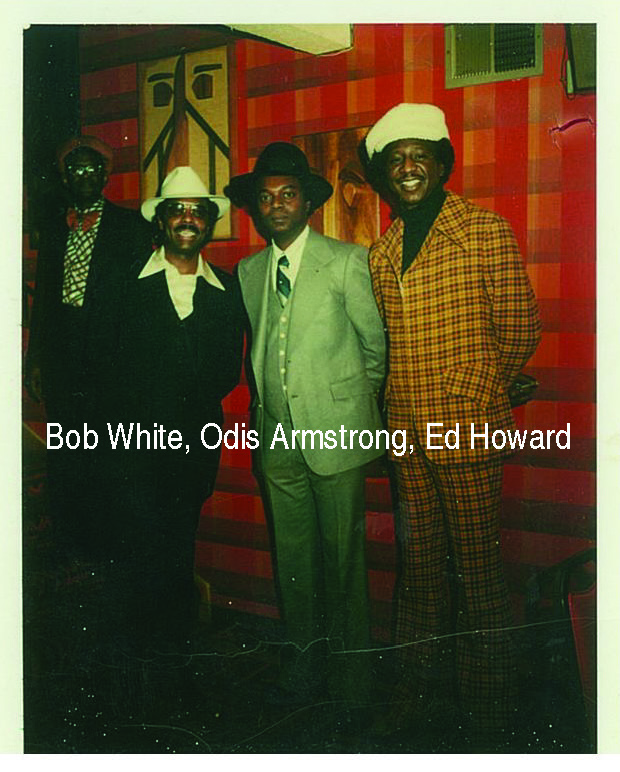 “ED HOWARD’S PLACE (EHP) is not your ordinary nightclub ….. and thanks for that! Ed Howard’s Place, located at 3614 Foothill Blvd., Oakland, offers much more than top quality entertainment to Bay Area nightlifers. EHP is the plushest nightclub in Oakland and the Bay Area, and even more importantly, it brings the finest and friendliest Service (service emphasized by a capital “S”) ever offered to anyone, anywhere.

Taking a stroll through the club and staying awhile, you are certain to enjoy the type of nightclub you’ve often imagined and heard others brag about, but never thought possible to exist in Oakland; but exist EHP does, and how!

“From the jump” (or “from the get,” if you prefer), EHP customers find the atmosphere most enjoyable as they are greeted at the door by one of the club’s highly polished brothers, brother Mack. Brother Mack, with his patented smile and smoothing voice informs you at the door, of the club’s happening for the evening and coming events. t the same time you are being greeted, your ears are fixed on the good sounds of some of the finest local and national talent anywhere, coming from within.

Pick any night and you might catch such acts as the “Whispers” (also known nationally); Super Snaps Band; Non-stop LTD; EHP’s very own Equal Rights Band; the Emulations and other fine local groups (discriminately selected with service, high-talent, and showmanship towards EHP’s customers being the “must”). Besides these fine groups giving you an outstanding evening, EHP offers more – talented sets to accompany the band’s act, opening or break-time. Acts such as the Brown Sugar Dancers, Leroy Goodenough, the hep, (not hip), Mentalist-Psychic, Comedian Mel Pacheco and his ventriloquist partner Ken Karter with Rocky the dummy (or did I reverse that?); and we must not leave out emcee-comedians Buddy Lowe, Allen Wiltshire, and Mark Smith.

I did mention national stars, so how about the Ballards; Whispers; Motown’s next super-star, G.C. Cameron (of the motion-picture film Cooley High) appearing at EHP Aug. 21-23; Edwin Hawking-Aug. 28-30; Gloria Lynn, Slappy White, and many others including athletes, politicians, your neighbors and most importantly – you!

Excuse me! Can you ever forgive me? Here I’ve boasted of the fine Service Ed Howard’s Place brings to you and yet I’ve left you standing at the entrance with our doorman (not that he’s a bad fellow but the sights are inside) – come on in and take a look at EHP while being seated by Peggy McMillaim, head hostess or one of the club’s beautiful and always smiling hostesses. Perhaps (and it’s not uncommon at EHP) one of the managers, either Bob White or Otis Armstrong, will personally escort you to a perfect location and rap awhile with you and your party. In fact, I’ve seen Bob and Otis in action serving the customer to the “max”. Ed Howard can be seen rapping with you the customer, letting you know that the most important person at EHP is you.

The beautiful part about brothers Ed, Bob and Otis is that they not only take the time to be with EHP customers, they run the club like it is meant to be – complete Service in a business-like manner.

Ed Howard’s Place is very soulful but does not carry the typical image of a black owned club. A small, dark hole in the wall, filled with smoke (of all kinds), run-down restrooms, fast women and rough men, poor service and poor business practices, etc. (You know the image). EHP is quite the OPPOSITE: you can count on being in the plushest nightclub in the Bay Area; know you’ll receive outstanding Service, enjoy top-notch entertainment; feel safe to use a clean restroom; realize you are a V.I.P. at EHP; little to no smoked-fill section (and when smoke exists you can be certain it stems from cigarettes). In short, EHP is run in the same business-like manner as the Playboy clubs, Circle Star, the Grove, Vegas Clubs, etc. and I venture to say the Service is even greater and the entertainment equal.

Well now you’re inside EHP, so what sites awe you? Anyone of EHP’s four sections holds its own against any club in the area. You can enjoy yourself in a mellow, easy atmosphere while relaxing in the Kakuri Lounge or “get-down” in the Kianga showroom, check-out the happenings from the balcony, or enjoy the sliding-glass Kivu V.1.P. Lounge, with private bar, hostess, tables and an overview of the showroom. From floor to ceilings, wall-to-wall, (with unique wall decorations) EHP is beautifully designed and laid out for high discriminating soulful taste.

Ed Howard’s Place is truly the place for the people. Words cannot, and will not, describe the good vibes you’ll receive on your first visit to EHP, and the visits that are certain to follow. Quickly you will realize that Ed Howard’s Place not only offers East Bay nightlifers a variety of top-notch entertainment, without having to travel the hassling distance and headaches of San Francisco (toll, gas, parking, “don’t-give-a-damn” drivers, ragged streets, one-dimensional, high cost entertainment, etc). but brother Howard (along with Bob and Otis) is bent on giving service to all and a breaking in new upcoming local talent via use of the stage in front of a live and ready audience.

Remember: The Jackson-Five’s, Marvin Gaye’s, Flip Wilson’s and allstars began somewhere. Here talented new performers at EHP. Why knows, one day you might say: “I heard them first at Ed Howard’s Place”.

Enjoy the vivid article above depicting the adventure of three West Oakland childhood friends, and McClymonds high school graduates, who opened and operated a first-class night club (EHP) in East Oakland back in the 1970’s.

In the year’s last episode profiling the dynamic life of Oakland pioneer Mr. Ed Howard, we have a special treat for you, an exclusive, three-part glance into the renown Ed Howard’s Place Nightclub! More photos coming soon.

Be sure to check out the West Oakland Stories historical film, as well as the brief documentary “Between Black & White” detailing the historical alliances between Greek & Black communities.

Among one another, let’s put the No Negative Speak movement into practice.

West Oakland Stories Positive Feeling Movement Inc – “No Negative Speak” with each other.